Professional tool for the plug-pulling and destruction of profile, round and oval cylinder locks. it’s modified in a Zieh-Fix company and now is produced in a new design.

This special tool is specially developed for locksmiths and governmental agencies. With Zieh-Fix “Bell” you can easy and efficiently to remove any type of (profile, round and oval) cylinder locks. The tool allows fast opening of doors without damaging the door or the door guard. You can use the plug extractor plates for the pulling of plugs or it is also possible only to remove the plug itself from the cylinder, allowing quick and easy access to the locking mechanism.
The “BELL” often is the only effective manner of a time-saving emergency-opening, especially in the case of multiple-bolt locks and half cylinders (cylinders that only contain 1 plug and can only be opened from one side of the door), as commonly used for example in glass-doors, garage-doors, alarm systems and shades. As the device works with a single and centrally oriented pulling-mechanism there do not exist sideward powers during the actual pulling. This avoids the tilting or the breaking of the special pull-screws. 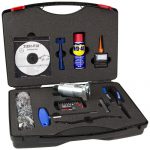 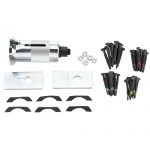